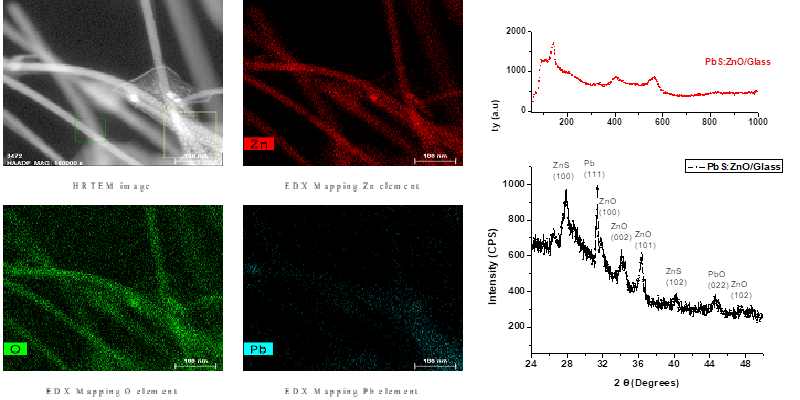 This work is licensed under a Creative Commons Attribution-NonCommercial-NoDerivatives 4.0 International License.

We obtained ZnO Nanowires films deposited on two types of substrate (Si (100) and glass) with 12 wt % PbS as dopant by simple thermal evaporation technique. High Resolution Transmission Electron Microscopy (HRTEM) and Energy-dispersive X-ray spectroscopy(EDX) images have confirmed the formation of ZnO Nanowires (NWs). EDX technique was used to investigate the elements content (standard analysis and mapping modes). Morphology and thickness of the films were investigated from surface and cross section of the films via Scanning Electron Microscopy (SEM) images. The Raman, photoluminescence (PL) and X-ray Diffraction (XRD) have confirmed the hexagonal phase structure of the ZnO Nanowires, which appeared to be very fine and their diameters were less than 40 nm and their lengths were of several micrometers using SEM and HRTEM. The effect of PbS as dopant on the growth of ZnO Nanowires as well as on the morphology for two substrates was investigated and compared. These Nanowires films could be applied in several fields. Mapping -EDX has confirmed the stoichiometry of prepared films. Finally, the structure (phase) was verified by different characterization techniques. The optoelectronic application of Nanostructures film will be study later.

Most read articles by the same author(s)